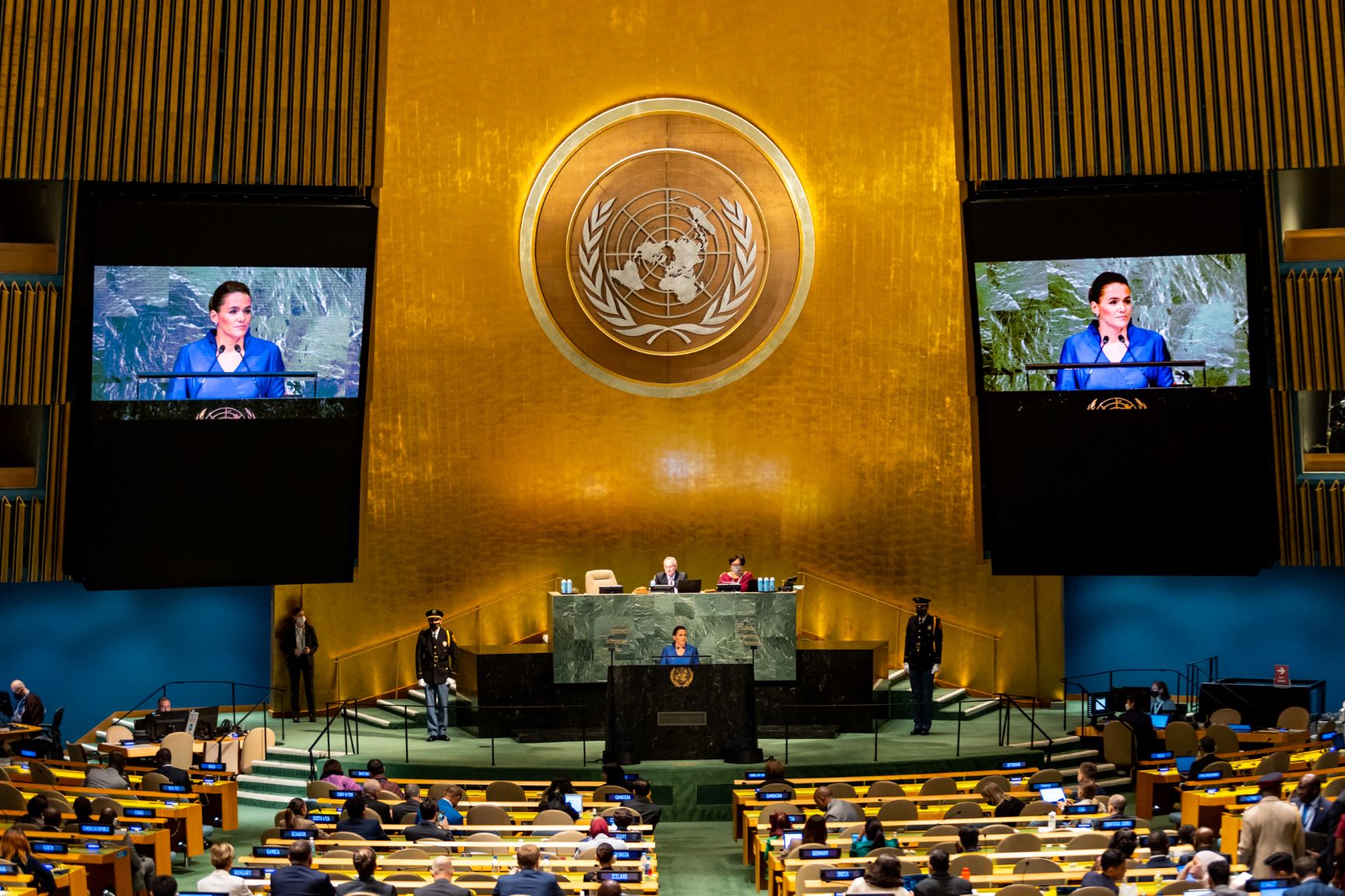 “It has perhaps always been the case that the waging of peace is the hardest form of leadership of all. I know of no single formula for success, but over the years I have observed that some attributes of leadership are universal, and are often about finding ways of encouraging people to combine their efforts, their talents, their insights, their enthusiasm and their inspiration, to work together.”

A quote from the speech of Her Majesty, the late Elizabeth II from 2010, delivered here, at the United Nations General Assembly.

Today, on the International Day of Peace, I stand here to urge the world leaders to be faithful to the legacy of Elizabeth II, so that we can live in peace.

I am particularly pleased and honoured to greet my fellow Hungarian, President Csaba Kőrösi. With his presidency, after forty years, Hungary is again serving as President of the UN General Assembly for one year. It is a great honour for Hungary – and especially so in the present challenging situation.  Mr President, dear Csaba I wish you every success in your work.

I am standing in front of you today as the President of Hungary. The first woman president of my country, wife and mother of three children.

As a President and as a mother I feel responsible for preserving an environment for the generations to come, in which they can enjoy security and comfort.

Today, on the International Day of Peace, I stand in front of the General Assembly to reaffirm our commitment to the UN Charter, Article I:

“To maintain international peace and security, and to that end: to take effective collective measures for the prevention and removal of threats to the peace, and for the suppression of acts of aggression or other breaches of the peace, and to bring about by peaceful means, and in conformity with the principles of justice and international law, adjustment or settlement of international disputes or situations which might lead to a breach of the peace;”

Let us remind ourselves to the main aim why the United Nations was brought to life. Peace.

We, people and leaders in the Western world, often pretend that we have lived in an age of permanent peace and prosperity since the end of the Second World War. In many ways this might be true, indeed, we live in a more peaceful and prosperous age than before.

Let’s not forget, though, the wars and armed conflicts that rage in many regions of the globe, which kill innocent people, tear  families apart, destroy infrastructure and economies, turn well-kept agricultures into wasteland and add to the destruction of the world that surrounds us. According to the Council on Foreign Relations’s Global Conflict Tracker, there are currently 27 ongoing conflicts worldwide. The tracker categorizes conflict into three groups: “worsening,” “unchanging,” and “improving.” Right now, there’s not a single conflict described as “improving.”

Globally, conflict and violence are on the rise, according to the United Nations. The UN has warned that peace is more under threat around the world than it has been since World War II.

The number of wars and armed conflicts around the world has been rising intensively since the Second World War. The scholarly optimism that the decline in the number of casualties might lead to a process where armed conflicts become irrelevant was quickly overshadowed by recent developments in Europe and other parts of the world.

I come from Hungary, from the heart of Europe. Everyone would assume that since the Second World War, peace has been a regional characteristic.

Let us not forget that only eleven years after the end of Second World War, Soviet tanks were rolling on the streets of Budapest. We had forty-five years of communist dictatorship and it didn’t take long after the peaceful change of regime of 1989 that war broke out in our imminent Southern neighbourhood. The killing lasted for a decade.

Now, after hardly more than 20 years, war is raging on the European continent – once again in Hungary’s neighbouring country. It fills us with particular concern, especially because ethnic Hungarians living across the borders also shed their blood.

Russia’s war against Ukraine is a constant threat and security risk not only for the Ukrainian citizens living in the war zone, but also for all of us. The threat of escalation is a reason for worry and action.
Hungary firmly condemns Russia's aggression against Ukraine, which has destroyed peace in Europe, caused dramatic human suffering and destruction, and has serious repercussions on the world order.

Since the beginning of this conflict, Hungarians have stood with the victims. We have been providing economic, social and humanitarian aid to Ukraine and to the Ukrainian people fleeing the war. Hungary is currently implementing the largest humanitarian operation in her recent history. The Hungarian people, churches, civil organizations, local authorities and the government gave shelter to nearly one million refugees since the outbreak of the conflict.

We have learnt that war is evil and leads nowhere. A war only has victims, and the ones with the greatest losses are families: mothers and fathers who lose their children in the battlefield, wives who lose their husbands in the fighting, children who lose their brothers, sisters in the hell of war.

It is in the strongest possible terms that we call for the investigation of war crimes committed against innocent civilians. These crimes must be documented, investigated and prosecuted by the relevant international institutions. No crimes committed can go unpunished.

What do we want in the UN? To win the war?

Hungary is a member of several allied systems. Above all, the United Nations, NATO, the European Union, the Council of Europe, and I could go on. These organisations were created by their founding fathers to pursue peace as their fundamental goal. I could say that they were created by the desire for peace, and I am convinced that the service of peace is the foundation of their identity.

Let me recall again the words of late queen Elizabeth II. I quote: “The aims and values which inspired the United Nations Charter endure: to promote international peace, security and justice; to relieve and remove the blight of hunger, poverty and disease; and to protect the rights and liberties of every citizen”.

Hungary urges fellow member states to declare peace as the major priority in the present conflict between Russia and Ukraine.

It is by no means self-evident, that today, at the time of war, energy and food crises, the organisations set up to avoid war and preserve peace are focusing on ideological indoctrination.
This is not what is needed today. Instead, we must regain our ability to distinguish between the essential and the irrelevant, the important and the unimportant, reality and fiction.

Most of us came to the Assembly from London. We attended Elizabeth II's funeral together and bowed at her coffin. We bade farewell to an exceptional monarch whose life was steeped in service to peace. We owe it to the people and to her memory to make our decisions in the same spirit.

Let us make a good peace.

Thank you for listening to me.